Ways to Fight Germs and Other Health Hazards on a Plane 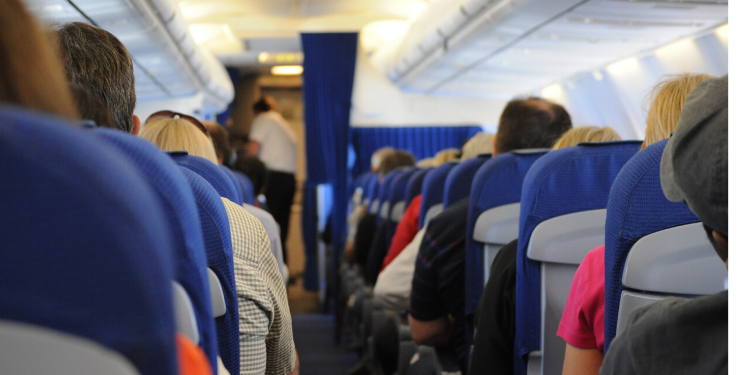 An airplane offers the perfect petri dish for germs to thrive: close quarters, frequent passenger turnaround and recirculated air. And certain areas — the ones we’re most likely to touch, as it happens — are especially icky: According to a study by the folks at Travelmath, who collected bacteria samples on flights at five different airports, the “hot spots” inside the cabin include the tray table — that was the worst offender, worse than bathrooms — overhead vent, bathroom flush button and lock, and seatbelt buckle. The seat pocket is another germ magnet (think soggy tissues and dirty diapers). Note that at the airport, drinking fountain buttons are the dirtiest.

“Airplanes not only create an environment that viruses thrive in,” says Nicholas Testa, a Los Angeles-based emergency medicine physician and chief physician executive for the Southwestern Division of CommonSpirit Health. “They also make it easier to transfer germs and viruses from person to person.”

Try these tips to stay healthy when you fly:

Aircraft cabins are usually cleaned when the plane stays overnight at the airport. Because the flu virus can last up to 24 hours on hard surfaces, germs can linger between flights. “About 80 percent of all infectious diseases we actually introduce to ourselves,” says Mark Gendreau, chief medical officer of Beverly and Addison Gilbert Hospitals. “You walk by and touch a contaminated surface then unwittingly touch your eyes, nose and mouth. My favorite factoid: Humans touch their faces about 200 times a day.”

On all the typically germy surfaces, especially tray tables, use a hand-sanitizing gel (with at least 60 percent alcohol). “When you get settled in your seat, put several drops on a Kleenex and wipe down those areas that you’re going to touch,” Gendreau says. Of course, disinfectant wipes work, too. Wash your hands frequently throughout your flight, particularly when you lower the tray table to eat and after you return from the bathroom — even if you’ve washed your hands with warm, soapy water. “There have been contamination issues with the water in the bathrooms on aircrafts,” he notes.

BTW: Those seat pockets can be tricky to clean, thanks in part to the porous fabric. You may want to use your own bag under the seat to store your reading materials.

If you’re flying during flu season, make sure you’ve had the flu shot. Influenza spreads by droplets made when people sneeze or cough, even from as far away as six feet — close enough to cause havoc when you’re crammed in with a crowd. While there’s no guarantee that the vaccine will prevent the flu, it lowers your chances of getting it, and if you do contract it, your illness is likely to be less severe.

The aisle seats put you in a more vulnerable position, with all those potentially sick passengers walking (and sneezing) past. Plus, people may steady themselves by grabbing your headrest when heading to and from the restroom (where, to make matters worse, the hand-washing conditions are not ideal). A study published in Clinical Infectious Diseases looked at a Boston-to- L.A. flight that had to make an emergency landing due to a norovirus outbreak, which caused vomiting and diarrhea in some passengers. What researchers discovered: Passengers in the aisle seats — even those who never left their seats — were the most likely to have contracted the virus.

“Some people are particularly vulnerable to getting ill, including those whose immune system is compromised by age or medications,” says Martin Cetron, M.D., director of the division of global migration and quarantine (DGMQ) at the U.S. Centers for Disease Control and Prevention. Those who take medication for arthritis, for example, may be more susceptible both to getting the infection and to the consequences of an infection. “For those people,” Cetron says, “wearing a mask in a crowded public setting may not be such a bad idea.”

“The humidity in the passenger cabin after takeoff can dip as low as 10 percent, with the only thing contributing to the humidity the breath of the passengers,” Gendreau notes. That dry air can do a number on the mucous membranes in your nose and airways, which need hydration to do their job. Downing plenty of water (at least eight ounces for each hour of flight) will counter the dehydrating effects of air travel. Bring along a reusable bottle. Most airports have filling stations and you can keep the water coming by visiting the galley of the plane once you’re airborne.

“It’s especially important to drink plenty of fluids if you’re on medication,” Gendreau says. Some drugs act as diuretics — blood pressure meds, for example — and can dry you out. What to avoid, Testa says: coffee, alcohol and sugary drinks, which will dehydrate you even more.

The position of the seatback tends to slow circulation, putting us at risk for deep-vein thrombosis, the formation of blood clots in the legs. Since most flights are packed for holiday travel, you’re more likely to remain seated. Resist the urge to stay put, and move about the cabin every hour or so. If you don’t want to budge, Gendreau says, you can do this exercise to help improve circulation: With your feet flat on the floor, bring your heels up and down, up and down, in a rocking motion. And if you are over 60 or obese, or have a history of heart disease, varicose veins or blood clots, see your doctor before your trip, especially if the flight is longer than two hours.

“One of the most under-discussed negative influences on our health is the effect of stress in lowering our immune system and the ability to fight off germs,” says DGMQ’s Cetron. And let’s face it: A day at the airport can frazzle the nerves of even the intrepid traveler.

“You’re worrying about getting to the airport, then you have to navigate to the kiosk, get your ticket, get through security and get to the right gate,” Gendreau says. “Pretty soon, we’re engaging in anxious behaviors. We’ll start rubbing our eyes or biting our nails, and that’s a total disaster.” Do what you can to eliminate stressors — from getting to the airport early for your flight, to having a meditation app on hand.

Why It’s Important To Manage Your Metabolism As A Senior
June 18, 2022

Strategies to Avoid Falls When You Have Osteoporosis
May 19, 2022
Go to Top