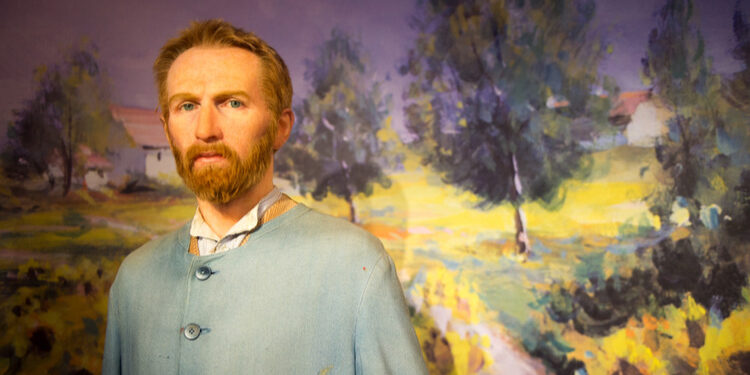 On March 30, 1852, Anna Cornelia Carbentus and Rev. Theodorus Van Gogh, living in southern Netherlands, gave birth to their first child, Vincent Willem Van Gogh. The baby was still born. One year later to the day, another baby was born to the couple bearing the same name.

During Vincent Van Gogh’s lifetime (1853-1890), he produced around 2,100 works of art, but there were few signs that he would become one of the greatest, if not the greatest, artist of his generation and arguably of all time. It was apparent, however, that Van Gogh was destined to lead a complex and troubled life both physically and mentally, ending in the loss of one ear and eventual suicide.

At one point he wrote the following to his sister: “(I am) two different beings, one marvelously gifted, fine and delicate, the other selfish and heartless.” Later his paintings explored this paradox by using opposing colors that together revealed his contradictory character and emotions, and perhaps our own.

During his struggling career Van Gogh invited Paul Gauguin, the celebrated French artist, to join him in Arles, France. While they were together the following took place: After verbally fighting, Gauguin went for a walk and Van Gogh followed him with a razor. They had another altercation and Van Gogh went home. One version of events says that after arriving home Van Gogh heard voices telling him to take the razor and cut off his ear. He did it. He then wrapped the ear in   newspaper and gave it to a woman at a local brothel. Van Gogh is reported to have said, “Keep this object carefully, in remembrance of me.”

Following the ear incident, Dr. Felix Rey took care of Vincent, treating him physically and mentally. They became close friends and Vincent moved in with him. When Van Gogh left Dr. Rey, he gifted his friend a painting entitled Portrait of Doctor Felix Ray. Dr. Rey was not fond of it and used it to cover a hole in a chicken coop, then gave it away. Today it is valued at $50,000,000.

The darkness in Van Gogh’s life is well known and beyond what most of us ever experience. The light is equally powerful. When you look at Starry Night or any of his eleven “Sunflower” paintings, their beauty is captivating. In a moment of great happiness Van Gogh painted one of his most famous works, Almond Blossoms, for his newly born nephew who was named Vincent. The painting brings forth the joy, hope and light, Van Gogh was experiencing. (In 1990 Almond Blossoms sold for $100,000,000)

What is it that makes one artist stand out from another? It is a mystery that is continuously changing. One’s personal connection gives value to art. Art brings forth what one feels in the moment. It has value because we give it value.

I have been reflective lately. At times it seems to me the whole world has no idea where it is heading.  It has helped to look into the starry night, to see the promise of Spring, and to recognize in the midst of dark days, there is hope.

As I write this in the middle of March, refugees crossing a Ukraine/Poland border are greeted by a piano player who plays songs in these darkest of days, watching countless strangers enter an unknown future. There is a dance for hope in the midst of despair. A sunflower grows. While YoYo Ma plays in front of our Russian Embassy, a concert is performed in a Kyiv city circle where Beethoven’s Ode to Joy is played. Almond blossoms will come. Amazingly, there is hope for the future while faced with unspeakable tragedy and evil. “I have a need,” says Ukraine’s president Zelensky, sharing his soul. The dance for hope, for peace, requires action.

I write this in my backyard mesmerized by a rose nearby as it hints at budding in anticipation of a new day.

LIGHT A CANDLE, SMELL A ROSE

LET US DANCE FOR PEACE.

Words from the troubled, yet great, artist:

“The fishermen know that the sea is dangerous and the storm terrible, but they have never found these dangers sufficient reason for remaining ashore.”

“What would life be if we had no courage to attempt anything?”

“If you hear a voice within you say ‘you cannot paint,’ then by all means paint, and that voice will be silenced.”

“One must work and dare if one really wants to live.”

“…And what is done in love is done well.”

“I feel there is nothing more truly artistic than to love people.”

Vincent Van Gogh has been gone from earth 132 years, yet still speaks to our day. His art and paradox are a mirror to our lives. A gift to us all. Priceless.

The exhibit, Beyond Van Gogh: The Immersive Experience, is an interactive art exhibit that is now touring the United States and Canada. It features over 500,000 cubic feet of projections, over 60,000 video frames and over 90,000,000 pixels. The visitors, myself included, are encompassed in Van Gogh’s art as it moves on the walls, ceiling, and floor of a room as large as a football field. The exhibit shows the artist communicating in ways that transcends the spoken word. Personally, I can feel his passion, feel his art in my bones. I find myself absorbed by the glorious ‘Starry Night” and a minute later self-reflecting in the sad eyes of a self-portrait. Van Gogh’s love for the world and downtrodden as well as his physical limitations, loneliness and mental depression, become part of me as he reveals himself. To gaze into his self-portraits is to look into the interior of his mind and a mirror of myself, revealing parts of me I didn’t know were there or had chosen to avoid. In the next moment Almond Blossoms appear representing for Van Gogh, and the viewer, both awakening and hope.

Ticketmaster says Beyond Van Gogh is the largest attraction in the world.

The Van Gogh Museum in Amsterdam received over two million visitors in 2019.