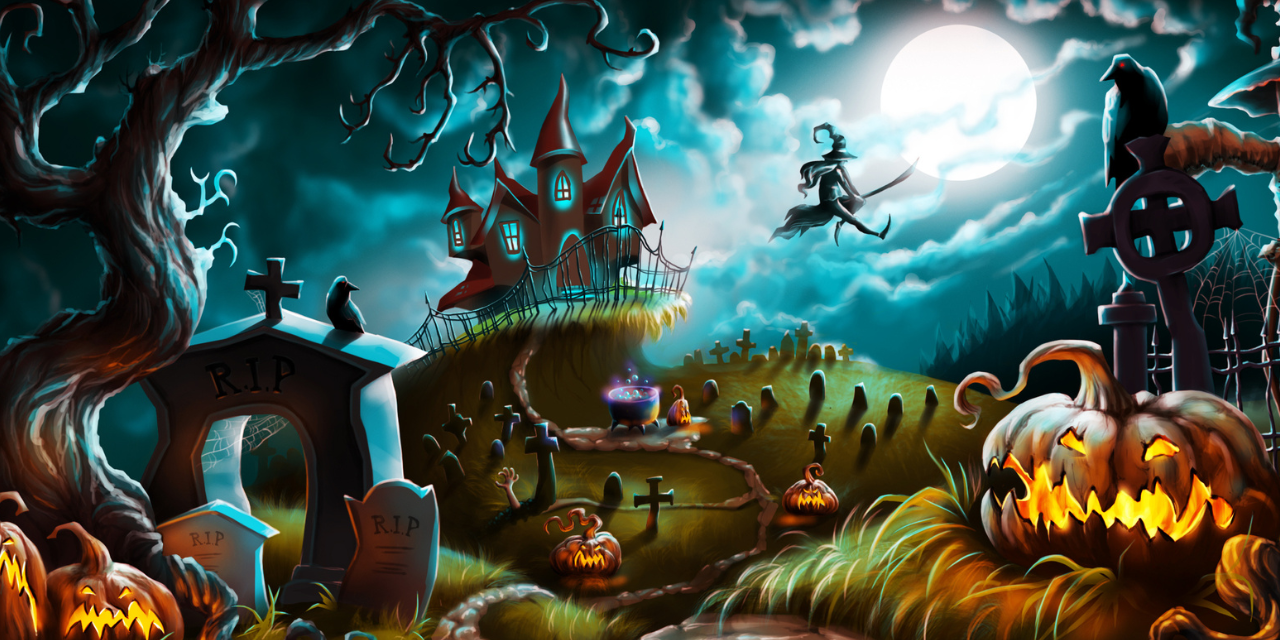 Something Wicked This Way Comes

Over the past few decades Halloween has become one of the biggest holidays in the United States, second only to Christmas. In 2021 Americans spent $10 billion on candy, decorations, and costumes during the Halloween season.

Halloween has a very long, complex, and multifaceted history.

Over 2000 years ago the ancient three-day Celtic festival of Samhain (pronounced sow-in) was a precursor to Halloween. Samhain concluded the three days with the transition to a new year that began November 1. In their celebrations they would light bonfires (bone-fires including human sacrifice) to appease the gods and wear costumes to ward off ghosts. The ancient Celts believed the dead would rise from their graves on Samhain and wander the countryside. Fruit and plates of food would be placed on doorsteps as gifts to appease the hunger of these spirits. Citizens would don costumes to hide themselves from wandering spirits and walk door to door reciting verses in exchange for food. The dark colors of Samhain were orange, representing the dying fall colors and black, signifying winter’s death. The Celts believed that on the night before the new year the boundary between the living and the dead became blurred, as exemplified by the presence of ghost and zombies.

In the eighth century, Pope Gregory III designated November 1 as a time to honor all saints. A celebration called All-hallows Eve (eventually shortened to Halloween) took place. The day’s celebration was similar to the three-day Samhain festival with big bonfires (less human sacrifice) and parades. Eventually, Samhain blended into All-hallows Eve, a one-day celebration on October 31. The blurring of life and death remained, symbolized by people dressing in costumes as angels and devils.

Halloween was celebrated throughout Europe but was not introduced to the Unites States until 1845 when thousands of Irish emigrated to this country because of the Potato Famine in Ireland. They brought with them the holiday they still called the Night of Samhain, which soon transformed into Halloween.

In our own day, Harry Potter takes center stage in continuing the myth surrounding Halloween. Author J.K. Rowling uplifts the celebration of Halloween at Hogwart School of Witchcraft and Wizardry. The October 31 Halloween feast served goblets of colored sweets, bats, sweet filled pumpkins, and water snakes. At the end of the feast, out of the decorated walls came ghosts that provided the entertainment.

In the story, Harry Potter was conceived exactly nine months before Halloween, and his parents were killed on Halloween when Harry was one year old.  Harry Potter is a wizard who casts spells and plays a great sport flying around on a broomstick.  Hogwart School and the students and teachers reside in the parenthesis between the material world and a spirit world. Hogwart School is the setting for an alternative reality, a space where the boundaries between the living and the dead are once again blurred. Halloween is embedded in the major events throughout the Harry Potter books. The much love story is seeded in the message of Halloween.

What does all of this mean for us? What is the message of Halloween for 21st Century America? And what difference does it make to those of us who are elderly?

Halloween presents ghosts, skeletons, zombies, and witches for our children’s entertainment. The trick is to do this while keeping the kids happy and away from nightmares.  Some scaring is fun, but it should not become morbid. Instead of being swallowed up by the darkness of life, the idea is to flirt and play with it, to challenge kids without going overboard. Candy is collected, and some of the year’s best parties take place, as young and old alike dress in scary costumes.

For us as seniors there is value in recognizing the inevitability of death. It is not that easy to see in a society that pampers us with bright lights, great food, entertainment, cruises, and pills that help us deny aging. While society hides the sick and dying, most of us still remain aware of the fragility of life. Our mortality is threatened by scary forces of all kinds that we might as well call demons. Halloween brings this truth home.

On the other hand, Halloween is also a celebration of our imagination and willingness to suspend our finitude and share the dance of life with neighbors, family, and friends. It is a time to scare the kids, but not too much, and give them candy and laugh at their costumes.  It is a time to remember how precious life is. It is a time to acknowledge our impermanence but not let it overtake our lives.

So, here is the Halloween paradox: Halloween has acknowledged for centuries the joy of living in the moment and the inevitability of death. Like no other time, our latter years tell us we must all learn to live with both.

“Something wicked this way comes. Open locks, whoever knocks.”

The doorbell rings. I, dressed in my skeleton costume, rise slowly from my easy chair and go to the door. Opening the door, I am greeted by a bunch of seven-year-old ghosts, goblins, and witches, all asking for a treat. I hand each a Snickers bar and they leave laughing and shouting to my skeleton self, “Happy Halloween.”