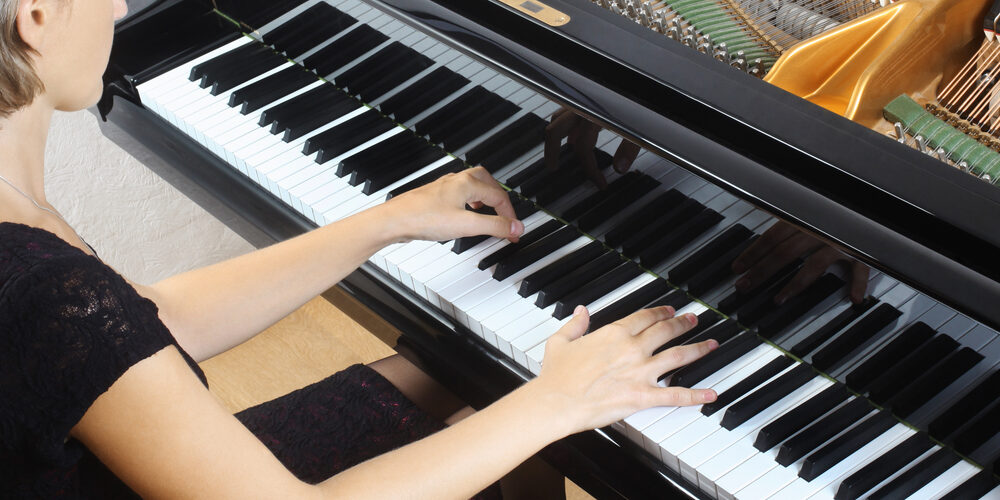 Last year when I told my twin brother that I had started taking piano lessons, he was dumb-founded.  “Why would you do that?”  he said.  “Wasn’t it bad enough the first time?”

What he remembers is being nine years old, sitting in a room full of strangers, unable to play the piece he had memorized for the recital.  Mercifully, mom let him quit taking lessons after that.

Over time, I discovered my own pleasures:  progressing through the lesson books, learning to play more complex pieces.  I never liked the performance aspect of playing and endured the recitals because they seemed important to Mrs. Kirby (it also never occurred to me that I could say no to a teacher).

In retrospect, I played the piano as much for the mental challenge as the musical aspects.

That’s still true, 46 years later.  My passion has been taking on hard intellectual tasks, pursuing new learning opportunities, and trying to improve myself.  In taking piano lessons now, at 63, I am certainly following this passion, but I am also reaping benefits that I never imagined.

I’m Not Alone
I am not the only baby boomer to take up an instrument later in life.  Stories abound of adults all over the world doing the same thing.

The New Horizons International Music Association, a non-profit organization in Rochester, NY, was created in 1991 to promote music-making among older adults, including those with no previous experience, as well as those who were once active in music programs but who have been inactive for a long time.  The first New Horizons program, a community band, was created at Rochester’s Eastman School of Music for students age 50 and over.  Today there are New Horizons bands, orchestras and other types of music programs throughout the U.S., Canada and Europe.

Levine Music, a non-profit school in Washington, D.C., was developed for students of all ages, ability levels and interests.  According to Lois Narvey, head of performance at the school, many of their 800 students are retirees, over a third of whom have never played an instrument before.

Wide-Reaching Benefits
Research shows that studying a musical instrument later in life provides significant cognitive benefits.  Jennifer Bugos, an assistant professor of music education at the University of South Florida, studied the impact of individual piano instruction on adults age 60-86.  After six months, those taking lessons showed significant gains in memory, verbal fluency, speed of processing information, planning ability and other cognitive functions, compared to those who had not received lessons (Diane Cole, “Your Aging Brain will be in Better Shape if You’ve Taken Music Lessons,” 2014).

Neuroscientist Norman Weinberger acknowledges that, although it’s definitely easier to learn an instrument when we’re young, our brains retain their ability to learn and change as we age.  It just takes longer, and it requires more patience.

Learning to play the piano is an excellent way to improve cognition, because it activates several areas of the brain simultaneously and requires multi-tasking:  reading vertically (treble and bass clefs) and horizontally (measure to measure), counting rhythms, coordinating right and left hands, attending to dynamics (louder or softer, faster or slower), all while listening to the sounds being produced and modifying play accordingly.

While children grow new brain cells during this activity, adults have to work with the cells they already have and create new connections (synapses) between them.  Still, the process keeps those cells alive and well when otherwise they might wither and die (Brigid McCarthy, “Never Too Late to Learn an Instrument,” 2008).

On the upside, adult learners have some advantages over children.  Neuroscientist Jessica Grahn, professor at the Brain and Mind Institute at Western University in Canada, reminds us that adults have years of learning experiences to draw upon.  They can figure out higher-level rules and apply them to new situations, while children learn mostly by rote.

Adults also are more aware of their moods, and they use music to explore and express those moods, as well as to contemplate and reflect on life in general.  They are more self-motivated, which is a huge factor in learning (Rebecca Adams, “6 Reasons Learning an Instrument as an Adult is Easier Than You Think,” Huff Post, 2017).

Personal Challenges
I started taking lessons in a four-week class called “I Used to Play Piano,” taught by a local teacher in a studio with digital keyboards.

Six adult students enrolled in the class, and two dropped out during the first two weeks.  The rest of us slowly learned to read music again, one song at a time, using the I Used to Play Piano book by E. L. Lancaster and Victoria McArthur. The book offers many styles of music, including classical arrangements and masterworks, popular tunes, gospel, jazz, boogie, blues and ragtime.

I found it very challenging to play throughout a 75-minute class with other students of varying ability levels, while constantly being introduced to new things, such as ensemble music, where each student plays a different part.  But within four weeks, I had regained my interest in the piano, remembered more than I thought I knew, and developed a desire to practice and become a better player.

One other student, a 70-year-old woman named Jane who had played from elementary school through college and who still owned the upright grand piano on which she had practiced as a child, wanted to continue lessons, so the two of us proceeded with the teacher.  I I had bought an 88-key Casio digital keyboard for the initial class, and I have happily played that for the past year.

The teacher gave us harder music, and at first the classes were stressful and exhausting, until Jane taught me to lower my expectations. Over time, I also had to improve my keyboard posture after experiencing neck and upper-back pain, and I learned to stretch and relax my hands after developing a temporary twitch in my left pinky finger.  Increased body awareness is one of the late-life lessons of piano playing.

We often talk about how different playing the piano is at our age.  It takes more time to learn and memorize, you never play some pieces very well (for me, the dreaded “Claire de Lune” by Claude Debussy), when you don’t practice you forget things quickly, some days you play better than others, and you always play better at home than you do in class.

Happy Surprises
Now I love playing ensemble music, especially jazz pieces.  I can play my part of Bizet’s “Carmen” for six hands on one piano without losing my place.  I find the other students in the class (there are now three of us, all over 60) to be a constant source of learning, pleasure and inspiration, when once they were a distraction.

The impact of my playing on others has been a happy surprise.  My book club finds inspiration in my efforts, and one member has started taking lessons at my encouragement.  My sister cried when I played George Tingley’s “Reverie” for her. “Mom would be so proud!” she said.  The other day when I was practicing, my husband called out from the other room, “That sounded great!  Now turn off the radio and start practicing!”

Now that I’ve shared my experiences, I want to practice!  I hope that you, too, have been inspired to take up something you always wanted to learn – or return to something from your past that might give new meaning to your life in the present.