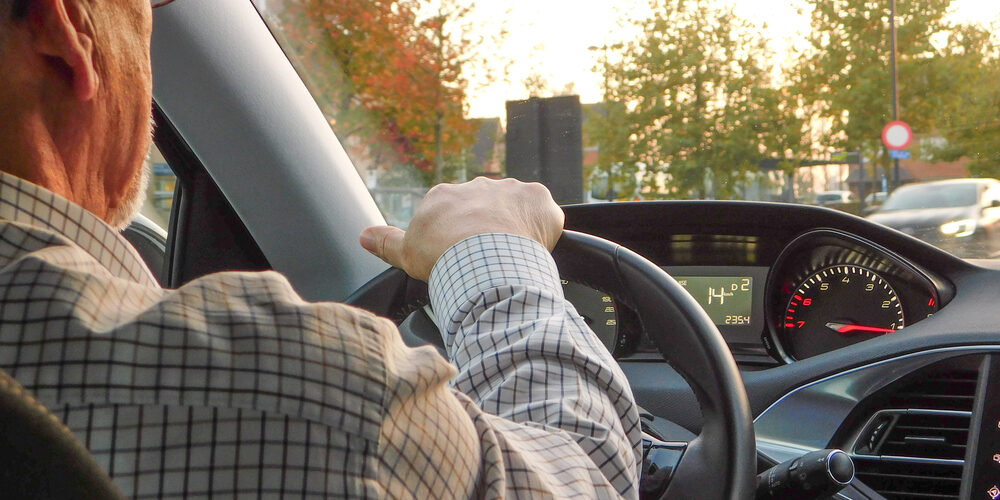 John Wood kept getting lost, among other things, while driving. Finally, his doctor advised him to stop. He readily followed that advice. He’d seen others go through the horrible experience of having their keys taken away by family members, and he wanted to avoid that. He says giving up driving was very hard.

Stopping to drive is one of the most difficult—if not the most difficult—situation a person living with dementia will ever face. Driving represents independence and freedom. Stopping forces one to either be dependent on others or use what can be other sometimes confusing methods of getting around. Some people decline those modes of transportation and become isolated, staying at home most of the time.

Whose Choice Is It? People with early-stage dementia are usually capable of making their own decisions, and this should be one of them. However, others – the person’s family or physician—may strongly suggest that the person stop driving. Finally, if the person has to take a driving test, they may not pass, and the state will probably revoke their license.

Some Signs Your Loved One May Want to Consider Giving up Driving: Some of the major signs are: 1) If they repeatedly get lost driving to familiar places, 2) If they cause an accident, 3) If a person whose judgement they trust strongly advises them to quit, or 4) if others will not ride with them or allow their children to ride with them.

Other signs include those in the following list, which appears in Kate Swaffer’s book, “What the Hell Happened to My Brain?” (Jessica Kingsley Publishers, 2016.)

Some Benefits of Stopping: On the other hand, there are advantages to stopping:

How to Get Around if They Do Stop:  The person can get rides from their spouse or other person. They can hitch a ride from other family members, friends, or neighbors. They can walk or ride a bicycle if the distance is short enough. This has a health benefit as well.

For longer distances the person can take a bus, tram, or subway, which are relatively inexpensive, but may be a bit confusing. They can also take a taxi or Uber, which cost more but are much simpler. Finally, some communities have vans for people with disabilities.

A Few Alternatives to Going out: Although they person doesn’t want to become isolated, they may want to use the following alternatives to going out at times: 1) Delivery services for prescriptions, groceries, meals, etc., 2) Have friends come to their house to socialize, or 3) Do some of their socializing on the internet, using Zoom or Skype.

If  They Do Continue to Drive After Their Diagnosis: It’s a good idea for the person to review the decision every six months because the person’s ability to drive will become more pronounced over time. They may want to consult with a person whose judgment they trust. The person might also want to limit driving to certain times, places, and/or conditions. For example, they may decide not to drive at night, on expressways, or in bad weather.

They may also want to set a precondition under which they will stop. They may decide they’ll stop driving if they get lost, if they can’t remember where they’re going, or if they get confused while driving. You can help them set their own precondition.

Coping Emotionally with Their Loss of Independence:  If the person does stop driving, he or she may experience feelings such a loss, grief, sadness, depression, anger, frustration and/or a whole host of other feelings. Here are some approaches to dealing with those:

Conclusion: Giving up driving is sometimes an issue for the elderly, but it always becomes an issue for people with dementia. It’s important to consider the situation carefully and arrive at a responsible decision. Remember, the person doesn’t want to be late for important events, get lost going to or from destinations, have an accident or—most importantly—get hurt or injure other people.

For More Guidance on This Subject, See:  Dementia and Driving: A Decision Aid and UQ Program Prepares Older Australians for Car-Free Life.

Marie Marley, PhD, is a nationally-recognized author on issues related to Alzheimer’s caregiving. She has published more than 450 articles on the Huffington Post, the French Huffington Post, the Alzheimer’s Reading Room, and numerous other sites. She is the author of the uplifting book, “Come Back Early Today: A Memoir of Love, Alzheimer’s and Joy,” which was a finalist for five literary awards. Caregivers say it helped them a lot. Former caregivers have said they wish they’d had it when they were caregivers. She is also the co-author (with neurologist, Daniel C. Potts, MD, FAAN) of “Finding Joy in Alzheimer’s: New Hope for Caregivers.” The Foreword is by Maria Shriver. Her website, ComeBackEarlyToday.com, contains a wealth of helpful information for Alzheimer’s caregivers. She lives in Kansas City with her two Shih Tzus.

Note: A similar version of this story was published on the Alzheimer’s Reading Room.

On behalf of Smart Strategies for Successful Living, our sincerest appreciation goes to Marie Marley for her contribution to our community website and commitment to Alzheimer’s caregiving.

Tips for Finding Senior Housing to Make Your Home
February 1, 2023

Create a Space to Help Your Child Learn and Grow
January 23, 2023

Retired? Here are Ideas for How You Can Spend Your Time
January 7, 2023
Go to Top