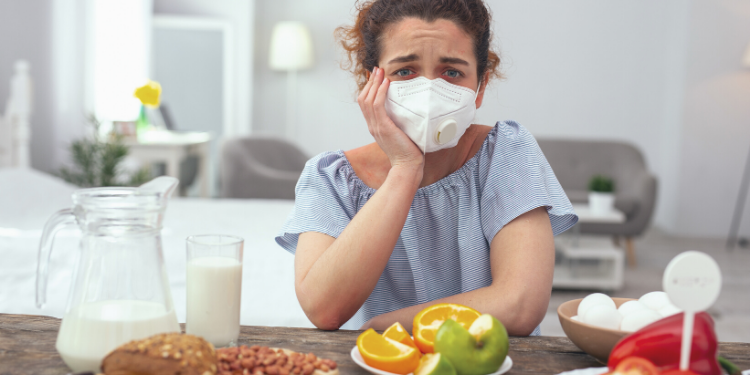 Cali Duke, a 28-year-old mom and account representative from Hailey, Idaho, broke out in head-to-toe hives a few years ago, she thought it might have something to do with medication she was taking for a kidney infection. But doctors tested her and found no allergy to the drug.

Even after she was finished with the medication, the hives persisted. “The hives were so bad, and I had them everywhere, even on my hands and feet,” Cali recalls. “I couldn’t put on my shoes. It hurt to walk or even get out of bed.”

A few trips to an allergist for blood testing revealed the problem: she was allergic to wheat and cocoa. It is a diagnosis that has completely changed her life.

With food allergy even the smallest exposure to a food can produce an allergic response—and the response usually begins immediately. In other words, there are no degrees of food allergy. Someone who is allergic to a food must avoid that food at all times.

“I have to read labels on everything,” Cali explains. “Not just on food but on body lotion, hair products—everything. The chocolate is worse than the wheat. Cocoa is in a lot of things. I can’t use cocoa butter or cocoa anything.”

Of course, this attention to detail is worth it to her. “The hives were awful. I don’t ever want that to happen again,” Cali says.

Food Allergy versus Food Sensitivity
A food sensitivity—sometimes called food intolerance—does not involve the immune system. Instead it involves a reaction in the digestive system. Food sensitivity is typically related to sugars or carbohydrates in certain foods, whereas food allergy is always related to a protein.

Food sensitivity can produce symptoms such as bloating, gas, stomachache, nausea, vomiting, and diarrhea. Although these symptoms are uncomfortable, they are not life-threatening like some food allergy symptoms. What is more, the symptoms of food sensitivity can be delayed for hours or even days. Some people even experience a cumulative effect to certain foods—they can have a little, but when they eat a lot, they experience symptoms.

“Because a food sensitivity does not produce an immune reaction, it can take us longer to realize that the food we are eating is revealing symptoms to us that are unpleasant,” explains Sally Connelly, a clinical nutritionist from Tubac, Arizona.

Both food allergies and food sensitivities are a growing problem.

Food Allergies on the Rise
Cali is just one of a growing number of people with food allergies. According to a study released in 2013 by the Centers for Disease Control and Prevention, food allergies increased approximately 50 percent between 1997 and 2011.1 Approximately 15 million people in the United States have food allergies, including 9 million adults—or 4 percent of the adult population.

“We have research that does confirm that food allergies are on the rise. It’s a fairly recent trend that has happened mostly over the past 15 or 20 years,” explains Robert Wood, MD, director of allergy and immunology at Johns Hopkins Children’s Center. “It’s not complete information, but it’s enough to say that food allergy is twice as common now as it was 15 years ago, maybe even three times.”

There are a number of theories as to why this might be the case, but one that keeps floating to the top is the hygiene theory. “The hygiene theory says we have too clean of an environment, and if the immune system isn’t exposed to things early in life, it can turn more of its attention to allergies,” Dr. Wood says.

Dr. Wood explains that there may not be just one reason for the increase in food allergies but instead there could be five to 10 things that have contributed.

Understanding Allergies
Some foods are more common allergens than others. In fact, there are eight foods that account for 90 percent of all food allergies: milk, eggs, peanuts, tree nuts, wheat, soy, fish, and shellfish.

Cali developed an allergy in her mid-twenties. “My doctor told me that anyone can become allergic to anything at any point in life,” she explains.

Indeed, adults can experience a sudden onset of food allergy symptoms, even with a food that has not caused problems in the past. The foods that most often trigger a reaction for adults are shellfish, peanuts, tree nuts, and eggs. If you have a history of other kinds of allergies, such as hay fever or animal dander, you are at a higher risk of developing a food allergy.

Most people with severe food allergies carry epinephrine with them at all times in case of accidental exposure to a food allergen. In fact, most exposures are accidental and can be the result of mislabeling or cross-contamination during preparation. Teenagers and young adults with food allergies are at the highest risk of fatal food-induced anaphylaxis.

There is not yet a cure for food allergies that is ready for prime time, but scientists are working on it.

“Even though it sounds easy to avoid what you’re allergic to, it’s really not,” Dr. Wood explains. “Life would be far better if we had a way to treat food allergy so that people didn’t have to suffer reactions and have their quality of life significantly affected by having to avoid so many foods.”

Dr. Wood and other researchers are experimenting with an approach called immunotherapy, which involves exposing people to very small amounts of an allergen in an attempt to desensitize them to it. The approach is still in the experimental phase, but Dr. Wood says it could be an effective treatment strategy in five to 15 years.

Until scientists identify a surefire way to eliminate allergies, individuals with food allergies will have to remain vigilant.

Connelly explains that the acids and the bacteria in the stomach and the intestines are important for digestion, but we have a lot of habits that disrupt the good work they do—including overuse of medications and alcohol. “In general, we’re walking around with poor gut health,” she says.

Identifying and addressing a food sensitivity can be a complicated process—and it requires close observation. Connelly recommends starting with an elimination diet, which involves clearing out the most common allergens. “It is difficult because most people don’t want to change their dietary habits,” she admits. “You need at least a month to clear everything from the GI [gastrointestinal] tract. It doesn’t happen in just a few days.”

After the elimination diet, Connelly has clients move to a rotation diet, where they rotate one food at a time back into the diet and wait to observe any reactions. She says it is best to add one new food every three or four days and to keep a food diary and record any symptoms or changes. Often the effects of eating a food are not immediate. “You might add wheat back into the diet and feel great the first day, okay the second day, and bloated and fatigued the third day,” she explains.

Connelly says the best way to cope with food sensitivities is by promoting gut health. She recommends that people repair their gut by consuming a low-irritant, low-inflammatory diet, which means removing dairy, soy, peanuts, processed meats, shellfish, citrus, refined sugar, caffeine, alcohol, margarine, and other inflammatory foods. In fact, she refers to the “four Rs” for gastrointestinal support: remove, replace, repair, and re-inoculate. Remove inflammatory foods, replace those foods with healthy foods and digestive enzymes, repair the gastrointestinal tract with nutrients like glutamine or aloe, and re-inoculate with probiotics.

Choosing Healthy Food
Whether you suffer from food allergies or food sensitivity, there is no doubt that the food you eat has a significant impact on your overall health and well-being. “We have an epidemic of obesity and diabetes and increased food allergies and sensitivities and poor gut health, but people are becoming more aware,” Connelly says.

This growing awareness is helping promote a new commitment to nutrition and health among those affected by allergies and sensitivities and among many who may not have experienced these issues but are eager to avoid the food-related health problems. “I’m trying to stay healthy and eat right now because I don’t want to put any added stress on my body,” Cali says.

5 Neurological Conditions To Be Aware Of For Seniors
September 28, 2022