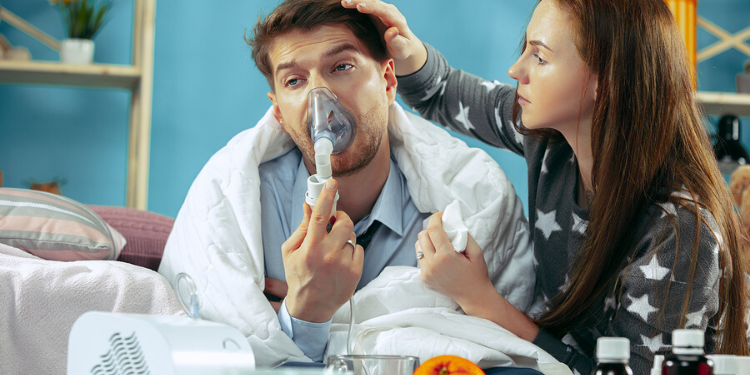 Despite the best efforts of public health experts to educate the public, flu myths abound, and it can be hard to separate fact from fiction. But when it comes to the flu, fiction is no laughing matter. It’s important to be armed with the facts in order to fight the flu.

What Exactly is the Flu?
Influenza—commonly referred to as “the flu”—is a highly contagious viral infection that attacks the respiratory system (nose, throat, and lungs). It is not the same as stomach viruses that cause diarrhea and vomiting and it is not the same as the common cold—in fact, it’s far more serious.

The flu virus is easily transmitted from person to person via small particles that result from coughing and sneezing. It can spread quite rapidly during a seasonal epidemic. Flu infection is characterized by sudden onset of a high fever, headache, muscle aches, sore throat, runny nose, non-productive cough, and general fatigue. The flu usually lasts for about one to two weeks and most people recover without requiring medical treatment; however, some people are at a higher risk for developing complications, which can lead to pneumonia and death.

Individuals at a higher risk of flu-related complications include:

Preventing the Flu
The best defense is a good offense, and the best offense against the flu is a flu shot. The Centers for Disease Control and Prevention (CDC) recommends a yearly flu vaccine for everyone over the age of six months—except individuals with high fevers, allergies to eggs, or previous severe reactions to the flu vaccine.

There is a rampant myth that circulates every year that the flu vaccine can actually cause the flu—but nothing could be further from the truth. The flu vaccine is comprised of the three viruses that are likely to be most common for the year, based on thorough research. However, the viruses in the vaccine are not “live” and therefore cannot infect you. The flu vaccine sometimes causes mild side effects that can be mistaken for the flu.

In addition to getting the annual flu vaccine, there are several things you can do to prevent the spread of the flu:

Treating the Flu
There is no cure for the flu; however, there are two antiviral drugs that can reduce the amount of time you are sick and help make you less contagious to others. Tamiflu comes in pill form and Relenza is inhaled. Both drugs are most effective if taken within 48 hours of the onset of flu symptoms.

Antibiotics are not an effective treatment for the flu because they fight bacterial infections and the flu is a viral infection. There is absolutely no reason to take an antibiotic to try to fight the flu—it’s futile.

If you suspect you have the flu, see a doctor immediately to receive a prescription for an antiviral drug. Aside from that, all you can do is rest and stay hydrated.

The flu is serious business and is not to be taken lightly. So, get your flu shot and get plenty of rest to avoid being sidelined by this potentially dangerous virus. See below to separate the myths from the facts.