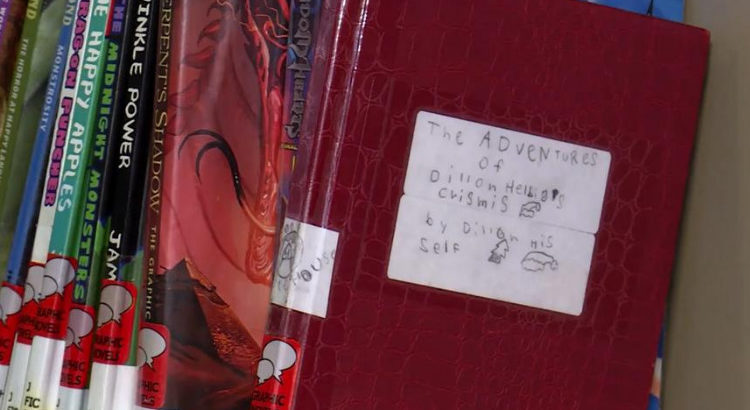 In my recently posted article “Real Beauty”, I chose a role model to inspire me to become a better version of myself in 2022 – Alice Neel, a 75-year-old New York City artist who painted herself in the nude to promote age awareness and body acceptance.

Now the local news station informs me there is someone right here in my own hometown who is also worth emulating, and he’s only eight years old!

Dillon Helbig, a second-grader who lives in Boise, Idaho, is a budding writer.  In December, his grandmother gave him an empty journal.  Within four days, he had filled it up with an 81-page fantasy adventure, illustrated with colored-pencil drawings.

Dillon’s book is about a star on a Christmas tree that explodes, leading Dillon into a portal that sends him back to the very first Thanksgiving in America.

He enjoyed writing the book so much that he wanted to share it with other kids.  So the next time he visited the public library with his grandmother, he slipped his journal onto the picture-book shelf in the children’s section.

Later, Dillon confessed the deed to his mother, admitting that it was somewhat “naughty-ish,” because he had hid the book under his jacket to sneak by the librarian.  When they went back to the library to retrieve it, they discovered that “The Adventures of Dillon Helbig’s Crismis” by “Dillon His Self” was missing from the shelf.

Several members of the library staff had already seen it, and the Branch Manager had read it to his six-year-old son, who declared it one of the funniest stories he had ever heard.

Since the manager, like all good librarians, is always on alert for promising books, he recognized that Dillon’s was “far too obviously special an item for us to consider getting rid of it.” He thought it really did meet the criteria to be included in the children’s section:  it was “very entertaining” and a “high-quality story that was fun to read” (“An 8-year-old slid his handwritten book onto a library shelf.  It now has a years-long waiting list,” Washington Post, January 31, 2022).

So he got Dillon’s mother’s permission to put a bar code on the book and officially added it to the library’s collection.

Local news station KTVB reported the story, which was picked up by NPR, the New York Times, and the Washington Post, The Independent, a British news magazine, reported that Dillon is currently a “national sensation.”

As a result of all the media attention, Dillon’s book is in great demand.  By the end of January, 55 readers were on the wait-list, and the library was looking into having it digitized as an e-book.

A local author has offered to collaborate with Dillon on a workshop for other children interested in writing a book.

But Dillon is pretty busy now, because he is working on a sequel.

Children Who “Can Do”

Dillon is not the only child to publish a book.  Wikipedia offers a dynamic list of “notable books” written by “writers in their early years,” which is surprisingly long.

In the fantasy genre, Nancy Yi Fan published her first book, Swordbird, when she was 12.  It became a New York Times bestseller and led to the publication of two more books in a Swordbird trilogy.

In India, twins Jyoti and Suresh Guptara finished the first draft of their fantasy novel Conspiracy of Calaspia when they were 11 years old.  The book became the number two best-seller in India and was expanded into a trilogy.

According to the Canadian Broadcasting Company, Dorothy Straight holds the world record for being the youngest published author.  At four years old, she wrote and illustrated her book, How the World Began, in 1962, for her grandmother.  It was published two years later.

The Guinness Book of World Records, however, names Christopher Beale, age six, as the youngest child author.  His book, This and Last Season’s Excursions, was published in 2006.

Certainly, these children are gifted, with above-average intelligence and creativity.  This is probably the case with Dillon, too.

But his success also has a lot to do with attitude.  In an interview, he told reporters that he has “been wanting to put a book in the library since I was five.”  He believes he can, and so he does.  Apparently nobody has told him otherwise.

Indeed, attitude is so important to achievement – in life, as well as in school – that an entire area of research has been devoted to the study of attitudes in the field of psychology.    Scientists define attitude as “a learned tendency to evaluate things in a certain way” (“Attitudes and Behavior in Psychology,” 2021).  Attitudes are formed through upbringing, personal experience and observations of others.

In a 2018 article in Psychological Science, researchers reported findings from a study of 240 children ages seven to ten.  They used MRI brain scans to map the neurological effects of attitude toward learning and found that being positive greatly increased children’s ability to answer math problems, remember information and exercise problem-solving skills.

Positivity has a cyclical effect:  a positive attitude generates interest, which encourages practice, which leads to greater achievement, which increases self-perception of ability, which leads to more positivity.

Dillon is young, idealistic, and enthusiastic, which makes his story especially endearing to retirees like me who are inclined toward crankiness.  Maintaining a positive attitude gets harder for many of us as we age, but it’s just as important in later life as it is in youth.

Findings from the Irish Longitudinal Study on Aging confirm that negative attitudes toward aging affect both physical and mental health in our later years.  Unfortunately, societal attitudes toward aging reinforce this negativity, which exacerbates health problems and diminishes the quality of life for older adults (“Attitude to Aging Impacts Everything About Aging,” 2016).

This is why I am adopting Dillon Helbig as one of my role models for 2022.  He reminds us that when we approach life with an optimistic “can do” attitude, surprising things can happen.

Author and pastor Charles Swindoll once wrote about “Attitude” in what is now a famous passage.  It bears repeating and remembering on a daily basis, especially for those of us inclined to see life through a negative lens:

The remarkable thing is, we have a choice every day regarding the attitude we will embrace for that day. . . .  I am convinced that life is 10% what happens to me and 90% how I react to it.  And so it is with you…we are in charge of our attitudes.”

Swindoll gives us the best method for changing a negative attitude, and it’s the same approach recommended by the recovery community:  take it one day at a time.

One step at a time, we can make wonderful and unexpected things happen in our ordinary, everyday lives.

Just look at Dillon, who became a national sensation one page at a time, which, after all, is the only way to write a book.