A Collector’s Dilemma: Balancing the Past, Present and Future 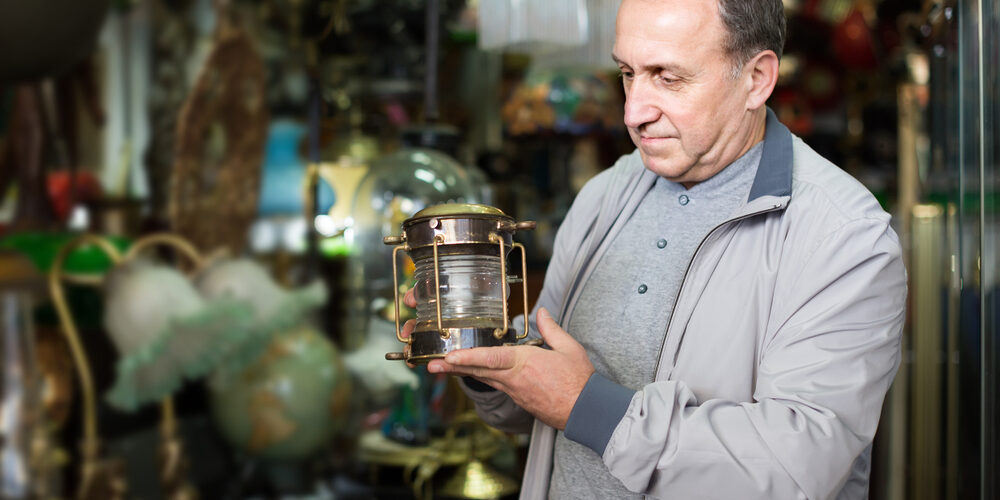 Have you ever thought about all the objects you own – and why you keep them?  At different times in our lives, most of us sort through, re-arrange and discard old things to make room for new.  Researchers say we practice “mastery of possessions” in order to gain a sense of control over our lives.

But in later life, disposing of things becomes more difficult.  “The assembly of personal belongings, tended for years and conveyed to later life, becomes at this life stage a collective and transgenerational matter” (Gabriella Smith and David Ekardt, “Confronting the Material Convoy in Later Life,” 2011).

Tim’s story illustrates how challenging this phase of life can be, especially for a person whose history and identity are closely tied to the things he collects.

The Psychology of Collecting
My husband Tim, who is 62, has been collecting antiques for 50 years. His mother and two of his aunts were collectors, and so is his older sister. He spent his youth tagging along to garage sales and flea markets.  Collecting appealed to the family’s working class values:  they liked nice things that were affordable and enjoyable but that could also be sold later for a profit, if desired.

A collector is, by definition, a person who collects things of a specific type. Tim collects old telephones from the late 1800’s and early 1900’s – candlestick phones, desk phones, pay phones, wall phones and the paraphernalia that goes with them (attachments, notebooks, advertising, signs).  He has over 300 telephones, some on display and many stored away.  He also has smaller collections of other types: clocks, lamps, pictures, calendars, pottery, Fiesta ware, art deco figurines, toys, kitchen collectibles and more.

The roots of collecting run deep. In Tim’s case, “complex patterns of emotions and thought [have] become embedded in and symbolized by concrete things” (Meryl Alper, “The Many ‘Meaning of Things,’ June 12, 2011).

Psychologist Christian Jarrett, writing for The Guardian, describes some of the emotional and thought patterns that underlie collecting.  For example, family heirlooms or other pieces from the past represent connections to people and places long gone.  Collectors sometimes feel a responsibility to preserve them for posterity.  Other items represent the collector’s identity.  They express meanings or feelings, encode values, and reinforce the collector’s conformity or uniqueness.  Still other items may conjure the future — projects the collector might want to take up at a later date.

Researcher David Ekerdt and his colleagues explain the psychological pull of collecting in a single sentence: “People keep things to symbolize past, present or future selves” (“Household Disbandment in Later Life,” 2004).

Sometimes these selves get out of sync, and a long-held collection begins to feel incommensurate with the collector’s current life stage.  This is what happened to Tim.

Reality Checks
To everything there is a season, including collecting.  Two experiences in the past year convinced Tim that it was time to downsize.

The first occurred around the death of his son’s father-in-law, a wealthy man who spent a lot of time and money collecting things, including multiple houses to hold his collectibles.  The man’s widow, who is a collector herself, has been unable to decide what to do with these possessions.  As a result, Tim’s son is overwhelmed by – and resentful about — the avalanche of goods coming his way.  The elder man’s legacy feels more like a burden than a blessing.

The second experience was a recent visit home to see his 86-year-old mother, where they had several unsuccessful conversations about the disposition of her things.  She lives in the same tiny farmhouse where she has lived for over 65 years.  The barn, chicken coop, shed, and house are all stuffed with collectibles, many of them ruined by water damage and neglect. His mother worries about what will become of these things, but she refuses to part with a single item.  On this trip, Tim observed with alarm that his mother is now teetering on the brink between collecting and hoarding.  She has been saving paid bills and envelopes from several years ago and piling up newspapers and magazines.  She can barely navigate through the house and has fallen several times.

Tim’s aunt, who slipped into dementia in her 80’s, was by that time a full-fledged hoarder.  She had become a danger to herself and had to be physically removed from her house by the sheriff and placed in a nursing home.

The decline of these women – from whom Tim learned to be a collector — is a difficult truth to bear.  He feels angry at his mother for her inertia in the face of the accumulated past:  how selfish to leave all of that stuff for other people to deal with!

The Garage Sale
And so, on a sunny day in May, Tim held a garage sale and said goodbye to many of his beloved collectibles.

It took several weeks to prepare for it, and the items covered ten six-foot tables.  There were also boxes of pictures and frames, antique clocks and phones, and several pieces of furniture.  People asked if he had once owned an antique store!  Everything was priced well below market value, and Tim negotiated down from there.  As a result, he sold about 55%, which was pretty good for a six-hour sale.  Most of the remaining items were donated to thrift stores, and Tim kept only a few things to sell on ebay.

On all accounts, the sale was a resounding success.  So why did he feel so sad?

Letting Go and Moving On
The sale represented a major life transition. Tim had to deal with “remnants of a past self” – a younger Tim who had desired, paid for, and tended to every one of these items.  At the same time, he saw glimpses of a future self – an older Tim who lived in a narrower world with fewer possessions and limited options for “self-expansion” through collecting (John Lastovicka and Karen Fernandez, “Three Paths to Disposition:  The Movement of Meaningful Possessions to Strangers,” 2005).

When objects are a central part of a person’s history and identity, as Tim’s collectibles have been, disposing of them involves a “process of detachment from the self” (Gabriella Smith and David Ekerdt, “Confronting the Material Convoy in Later Life”).  It is a complex task that causes grief.  But if successfully accomplished, it “exemplifies a strategic, adaptive style of aging” (David Ekerdt et al. “Household Disbandment in Later Life,” 2004).

Eventually, Tim will gain a psychological boost from knowing that he demonstrated emotional maturity in mastering his possessions before they became a burden to himself and others.

In the end, the self is reflected not only in what we own, but in what we disown.   Sometimes disposing of things becomes the ultimate loving gesture — and the best possible legacy — that we can leave for others.