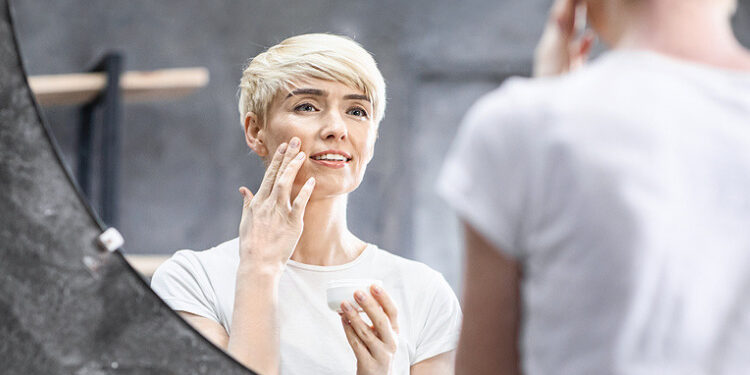 It’s normal for skin to change as you age: It becomes thinner, loses its sense of smoothness and may develop wrinkles and age spots. While you can’t slow the march of time, you can take steps now to protect your skin and help restore a youthful glow.

“Your skin can repair itself at any age,” says Lauren Ploch, M.D., a board-certified dermatologist in Augusta, Georgia, and Aiken, South Carolina. “It’s these little things that people don’t realize can make a world of difference in two, five or 10 years.”

Taking care of your skin won’t just help you look more youthful; it could also save your life. Skin cancer is the most common cancer in the United States, with about 1 in 5 Americans expected to develop it during their lifetime, according to the American Academy of Dermatology. And rates of melanoma — the deadliest form of skin cancer — have increased among older adults in recent years.

Making a few lifestyle changes — and altering harmful behaviors — can help protect you from cancer and slow the aging process. Start by avoiding these eight bad habits.

It doesn’t matter if the only time you go outside is to get the mail, dermatologists say: It’s still important to apply a broad-spectrum sunscreen to your face, neck, chest, hands — all areas of exposed skin — every day. Most of the sunlight damage in a person’s lifetime occurs during everyday activities such as driving to work, picking up the newspaper and walking the dog, says John Wolf Jr., M.D., chair of the Department of Dermatology at the Baylor College of Medicine.

“It’s not all playing golf, tennis, sunbathing and skiing,” Wolf says. “Remember, the sun comes through the windshield of your car and through windows” at your home and workplace.

Dermatologists recommend mineral-based sunscreens that use zinc oxide or titanium dioxide to block the sun rather than those that use chemicals, which can irritate your skin. If you’re spending time outside, make sure you reapply about every two hours, or after swimming or sweating.

Regular daily use of an SPF 15 or higher sunscreen reduces the risk of developing melanoma by 50 percent, according to the Skin Cancer Foundation. And if a fear of skin cancer isn’t enough to convince you to reach for the sunscreen, consider how it can affect your appearance: A study published in Annals of Internal Medicine found that women who used a broad-spectrum sunscreen daily had no detectable increase in skin aging after four and a half years compared to those who used it only occasionally.

“I put my sunscreen by my toothpaste, so I see it and put it on automatically every day,” Wolf says.

Add this to the ever-growing list of reasons to give up cigarettes: A raft of research shows smoking accelerates premature aging of the skin. Over time, smokers are more likely to experience dry skin, uneven skin pigmentation, baggy eyes, a saggy jawline, and deep facial wrinkles and furrows. “It has been observed that the skin of smoking addicts at the age of 40 years resembles skin of nonsmoking 70-year-old adults,” wrote the authors of one published review.

Smoking also slows the body’s ability to heal itself and increases your chance of a skin infection, plus it boosts overall inflammation in your body, says Heather Holahan, M.D., a dermatologist at UNC Health and an assistant professor at the University of North Carolina at Chapel Hill.

Meanwhile, the carcinogens in cigarette smoke significantly increase your risk of developing a variety of cancers, including skin cancer.

A little exfoliation can be a good thing for skin. It sloughs off dry, dead skin cells to reveal glowing, youthful skin. But many people scrub too hard or exfoliate too often, dermatologists say, which can damage your body’s protective barrier.

Over-exfoliation causes inflammation, dryness, irritation and tiny breaks in the skin, Holahan says. It can also contribute to breakouts. And because skin thickens in response to trauma, if you continue to over-exfoliate, your skin can become dull and scaly over time.

If you exfoliate regularly and your skin isn’t improving, limit your scrub sessions to once a week and dial down the rubbing, Holahan advises. Or try a chemical exfoliant that uses ingredients such as alpha and beta hydroxy acids to gently dissolve dead skin cells.

Many people love strongly scented soaps and lotions, but the products you used when you were younger may start to cause rashes and irritation as you age because your skin thins and becomes more sensitive. Artificial fragrances, dyes and other chemicals also exacerbate dryness, Holahan says.

If you tend to have dry skin, choose fragrance-free soaps or cleansers designed for sensitive skin, as well as “free and clear” laundry detergents and dishwashing liquid. To seal in moisture, apply a fragrance-free lotion or moisturizer every time you wash your hands or face.

Alcohol dehydrates your skin, which causes wrinkles to be more visible, and it has been linked to under-eye puffiness, midface volume loss and increased flushing or redness. Alcohol use also increases your risk of acne and rosacea, and research shows it may even make you more susceptible to skin cancer.

A study published in the British Journal of Dermatology, for example, found that drinking more than one drink a day increases your risk of malignant melanoma by about 20 percent, and the risk increases if you drink more that. Researchers believe that alcohol makes your body more sensitive to ultraviolet radiation and reduces its immune response after sun damage.

It’s human nature to scratch and pick at bug bites, scabs, pimples and other bumps on the skin, but you can cause an infection or create a permanent scar, dermatologists say.

The habit also makes it harder for doctors to diagnose problems. “If you pick at something and there’s a thick blood crust or a scab, I have to get a much deeper sample to send to the pathologist, and you end up with a larger scar,” Ploch says.

Whether you’re a chronic picker or you simply can’t resist scratching an itchy mosquito bite, Ploch says the solution is simple: Cover the area with a Band-Aid for a few days. “Our skin doesn’t actually breathe. It doesn’t need to air out or dry out, so cover anything that is being picked,” she says.

Skin cancer is highly treatable if you catch it early, so it’s critical to check your skin regularly, Wolf says. If you have a mole or other spot that’s growing, itching, bleeding or changing in any way, immediately make an appointment to see a dermatologist, Wolf advises. A change to a mole or a new mole is often a sign of melanoma.

The most concerning ones are very dark, an irregular color, an uneven shape or growing quickly. Remember that melanomas can appear even in places that don’t get a lot of sun exposure. Ploch has found them in the groin area, on the buttocks and in the crease behind the ear.

“I want people to come in whenever there is anything that they’re worried about,” she says. “Some people tell themselves over and over it’s not a big deal until it’s too late.”

Many older adults suffer from dry and cracked skin in the winter. Taking a hot steamy shower or bath may feel therapeutic, but it can make the problem worse. “You feel good while you’re in there, but in the long run, heat dries skin out and makes itching worse,” Wolf explains.

Instead, aim for a quick lukewarm shower, and make sure you use a mild, fragrance-free soap or body wash, Wolf suggests. If your skin is excessively dry, consider using soap only in skin folds and other areas that tend to smell, rather than all over your body.

After your shower or bath, while your skin is still damp, slather on a high-quality cream or lotion to trap moisture in your skin. ​